At the moment (URP 12.1.5, May 2022) there is no easy way to have custom Post Processing effects in Unity’s URP working with Volumes.
The URP Roadmap says that it’s “in progress”, but even if this has been the case for a while now, we do have some features that can help us manually achieve the same result anyways (similar to the previous Post Processing Stack V2).

You will be able to you place Volumes in the scene and have their attached post processing effects get applied gradually based on the camera position, like this:

Since we’ll be using actual Volumes, I hope that once Unity rolls out their official (or better / documented) solution, it will be really easy for us to convert from this custom solution to their new one - and I hope that it happens soon. Until then… let’s start!

Unity has some built-in post processing effects in URP, like Bloom, Vignette and similar.
The good thing about packages from the Package Manager is that they’re all open source, meaning that we can open their files and discover how they’re doing things - which is exactly what I did and what you’ll see here. 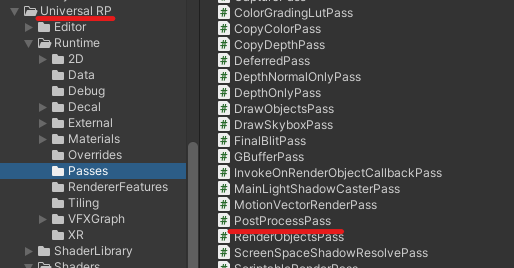 …we can see that Unity is performing a few steps:

We will do this too (kind of) - and jokes aside - things are not documented yet AND shaders are obscure anyways, so I’ll explain stuff as easily as I have understood them. Be prepared.

Unity also “creates the necessary materials” inside their pass, but they also invoke a method that destroys them (otherwise we would have our memory fill up quickly) and I couldn’t find where/how it’s invoked. I also needed these materials elsewhere in my game, so instead of having duplicates I simply opted for having:

P.S. This post assumes that your project is already set up with URP and that it is enabled to render its default post processing. If it’s not, read more in the documentation.

This post was written for Unity 2021.X, so in case there’s a different way to perform custom passes/features in higher version(s), you can always check what they changed from their package folder.

As an example, we’ll create a super simple post processing effect that will fade the screen color based on the volume intensity.

Volumes let you fade effects parameters gradually based on their weights (“interpolating” from 0 = no effect, to 1 = full effect). They can be applied globally or locally (where weight is also affected by the camera’s distance from the volume bounds).

You can read more about interpolations, in my blog post about Easing Functions.

At this point we can already create a new volume in the scene and add this exact volume component to it.

Now, let’s talk about the most obscure stuff:

Volume Components are really cool because they do everything. The parameters we write inside them are automatically interpolated by Unity’s Volume class based on camera distance etc., meaning that we can sit back and relax… except for the things that are not documented anywhere (but that’s why this post).

First, there are different types of parameters. We cannot use standard “float” or “string” types, but we must use the ones that end in “Parameter”, like “FloatParameter”, “IntParameter” and more, in order to let Volumes do the magic with them. (More precisely, the ones that inherit from “VolumeParameter”.)

Until there’s an actual documentation… just start writing “parameter” inside Visual Studio and it will tell you what else exists.

Different parameters are interpolated differently, and some are not interpolated at all. You can discover this by their prefix, for example “ClampedFloatParameter” (which we used above) interpolates from a minimum value to a maximum. It acts like if you have “[Range(min,max)]” before a float. Don’t change it with a “RangedFloatParameter” though, which is actually a Vector2. (??)

You will want to use “Interpolated” parameters (like “ClampedFloatParameter”) for stuff that will change based on the weight/distance of the volume, for example an intensity.
You will want to use “Non Interpolated” parameters (like “NoInterpColorParameter”) for things that do not have to change based on the volume weight, for example an “overlay color” (which might be interpolated with the intensity already, so doing it further will create a mess).

If you see weird results when the volume weight changes, it’s probably because you’re using the wrong interpolated parameters.

You can also create your own custom Parameters and override the “Interp” method as you prefer, creating different easing functions and more. (Again, here is my article about Easing Functions in case you need it.)

Please, please, please! When you declare an “Interpolated” parameter (like “ClampedFloatParameter”) be sure to use its “zero weight”/”lerp start” value as default! For example, if you want a float that goes from 2 to 4, then write new ClampedFloatParameter(value: 2, min: 2, max: 4);. This is the value that the Volume will use when lerping from zero weight to full weight, otherwise if you use an higher value (like: value:3, min:2, max:4) it will actually stop at 3 and never reach the minimum, going from 3 to 4.

Enough with the Volumes magic, it’s time to render our effect!

First, we need the actual shader that will process our image.

If you are familiar with shaders already, you might be happy to know that its format is the same as the ones we have always used (instead of the Post Processing Stack V2 that changed stuff a bit).

You can create it both in Shader Graph:

OR in HLSL if you prefer:

Of course, just be sure to declare the “_MainTex” property (which is the screen color), and then all the Volume Component ones (“_Intensity” and “_OverlayColor”).

Then, we can declare the renderer feature.
We only need the bare minimum to make it work, so simply create a script called “CustomPostProcessRenderer” and add:

It will throw some errors because we still need to create our custom pass (also don’t forget to reference the Unity URP assembly, in case you’re using them), so let’s do it right away.

This is where the fun happens (effects get rendered).

I will explain things in the script’s comments, so create one called “CustomPostProcessPass”:

You might still have some errors if you didn’t set up the class that creates/gets the materials.

In case you need some hints on how to set up one, here is an example (which expects you to have this ScriptableObject named “CustomPostProcessingMaterials” in a Resources folder):

Otherwise you can create materials dynamically as Unity is doing in their PostProcessPass.

As the last step, we simply need to tell Unity’s URP renderer to use our Custom Renderer Feature.

Head over your “Renderer” asset, which might be a forward renderer, a 2D renderer or similar, and add the “CustomPostProcessRenderer” feature: 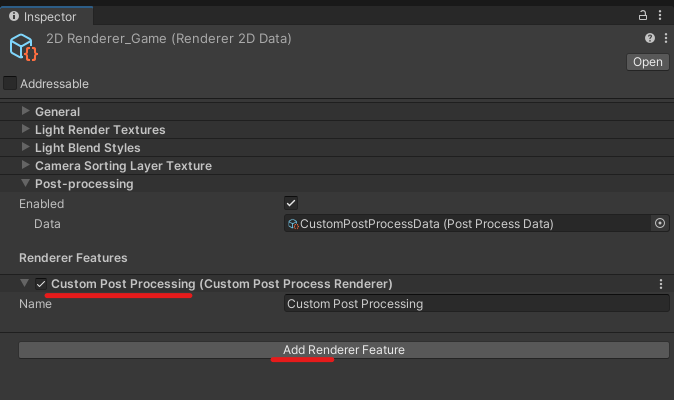 Believe it or not… that’s it!
You can now use volumes to integrate your own custom post processing effects, and hopefully it will be easier to port into the official solution once it arrives.

Hope this helps! Please let me know if it did (and show some results / share it around?), so that I get really happy and work on other posts too. Have fun with it - Cheers!

Read my next game dev content as soon as it's ready, straight to your inbox. (you can unsubscribe at any time.)


[Browse all other posts here]