Hi, I'm Febucci and you're reading a post about my game development journey. I create indie games since 2015 and I also share anything I find useful while I'm making them, including my own notes and tips. Enjoy!

Easing (or interpolation) equations are mostly used in animations to change a component value in a defined period of time.
You can move objects, change their colors, scales, rotations and anything you want simply using easing equations.

This is an example changing objects movement:

This process is often named “Tweening” and today I’d like to discover what’s under the hood and write about how to create your personal “Tween” class all by yourself.

Easing functions are useful to change a value from A to B in X time, based on a mathematical function’s graph.

We’ll tweak the “percentage” parameter in the Lerp method, looking at mathematical functions that are defined in the range [0,1] (in math the square brackets mean “included” so the functions have to exist in 0 and 1 too).

We choose the range [0,1] because in our code we’ll always pass a percentage as a parameter, which represents the current time of our animation. For example if 5 of 10 seconds passed we’re going to pass “5/10“, so “0.5“. It probably seems hard at the beginning if you’re not familiar with math and so on, but I’ll talk about it step by step.

If you don’t know what mathematical functions are here’s a really quick explanation, parallel with coding functions/methods. If you already know about them and you can jump on the Lerp section.

In our code we can have a method named “f”:

“f” is the name of the function, could be “g” “h” or whatever you want. Just like our method names.
X is a placeholder, and it’s replaced by a value that you give. Just like parameters/variables in our codes.
After the “=” we have an equation, that returns a value based on the “x” that we give, just like inside our method.

A function defines how a set of input values correspond to a set of output values. One input can return only one output.

To display this input-output relation we can use a (2D) cartesian coordinate system. At each X (input) corresponds a Y (output). 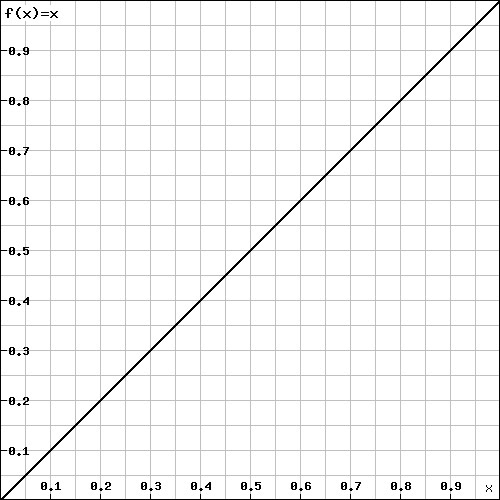 Of course, a computer draws all the points perfectly thanks to an algorithm, we can’t draw non-linear functions using this method (we’ll need derivatives, we’ll have to study the domain, the symmetries, the sign and so on), but that’s still useful to understand how drawing a function works without going deeper.

Tip: You can use any website that draws the graph of a function to follow up here, without having to calculate each point and more complex things.

Now that we know what mathematical functions are and how to draw and represent them, we can go forward with the “Lerp method”.

The method named “Lerp” stands for “Linear interpolation” and has always 3 parameters, a “start value“, an “end value” and a “percentage” (our current progress).

It’s useful to tweak a value “from point A to point B” based on the percentage (progress) parameter that you give.
Example: If we want to go from 0 to 4 and give 0.5 as percentage value, we’ll get 2 from this method (our middle value). If we give 0 we’ll get the start value and if we give 1 we’ll get the end value.

In Unity the method Mathf.Lerp is already written and ready to use.
Mathf.Lerp Documentation.

We can implement Lerp for our custom structs in mainly two different ways (I’m using the Vector3 struct as an example):

As you can see, the main logic is to lerp each value individually, choosing between a LerpUnclamped and a Lerp.

Now that we know about Lerp, we’d need a short code to see our progress! I’ll add a ball that moves from (0,0) to (0,1) in 1 second, but you can change whatever value you want! Light intensity, rotation, scale, color [….]

An abstract fragment of our code could be like this (to let you understand the logic):

In Unity we can write a Coroutine:

Here is this algorithm’s visualization:

You can see that the object’s Y coordinate goes from 0 to 1 directly, starting with a constant speed until the end of the animation. As the name says: Linear interpolation.

As you can imagine, with little implementation you can apply an interpolation on any component you want.

Now it’s the moment to play with math a bit, we just need to ask ourselves: what if we want to launch a rocket? Since rockets need time to accelerate, using the linear interpolation would be unrealistic. Can you imagine a rocket going up with a constant velocity directly from the launch? “0/10 physics engine broken”, someone would say.

Initially we need to find a mathematical function that “starts slowly“.
The “exponential” one (x*x) is what we need and the result is the following:

This “easing function” or “interpolation/tween type” is mostly called “EaseIn“, since it starts slow. You’ll see sometimes the name “SmoothStart” , which gives the same idea.

In our previous abstract fragment code we can now place this function:

or here in our Unity’s Coroutine:

You can then hit play and see the difference! Our imaginary rocket-fans would be proud of us.
The more times you elevate the “t”, the slower our component’s value will start.

Now that we know the overall concept we can start playing with functions even more.

The code to flip a function is the following:

With exponentials (x^y) I suggest to avoid placing a big loop in an function or even a recursion (like the function pow), since it could require a lot of resources in some hardwares. Consider writing suggest to write single easing functions and name them with their power value instead, such as “EaseInQuadratic” will have an “xx“. “EaseInCubic” will have “xx*x” and so on.

What if we want to show a rocket’s landing? Since our rocket decelerates while landing we need the opposite of EaseIn.

We could take the EaseIn graph and flip it, obtaining this:

The function now is slower at the end but we want it to start from 0 and reach 1, otherwise it will work inversely as intended. We can flip the progress inside the power, having this as the result:

That’s it! Now our object is slower at the end, which means that our rocket will reach its destination decelerating!

P.S. Dont be distracted because the ball is going up, it only means that it’s reaching the destination. Do you remember? if the percentage is 1 it means that we reached our end point (which is up in this example). If you set the target destination below the object it will go down.

The EaseOut function is the following:

This is the result if we elevate the progress in three different ways:

What if we want our rocket to start AND land using the same easing function? Well, we need it to start accelerating (EaseIn) and stop decelerating (EaseOut), creating a EaseInOut. We need to “use the last function the nearest we are with the end”….we need a Lerp!

The EaseInOut function is the following:

The more we progress the less we’ll use EaseIn.

“Mirrored” easing functions are mostly used for “UI” animations, since they reach their destination and then they go back at their initial state.<hr> You can imagine a “pop up“, a click on a button that increases its size and then resets it, […].

I like to call it “Spike” because its graph reminds me it and also because you can easily move a spike in a game using this!

We start with an EaseIn but this time we need to reach 1 when 50% of the time elapsed. This means adding a simple if condition to our code and divide by 0.5f.

When we’ve reached .5f we need the opposite and reach the start again. We need to “mirror” the EaseIn, so we’ll use it again but in reverse.

Our (final) code is the following:

In the image I showed earlier I used “Spike2“, where I raised the parameter given in each EaseIn to a power of 2.

Now that you know a lot of basic functions, play with them!

Here are my references: Robert Penner’s easing functions, http://gizma.com/easing/ (to look at some functions), https://gist.github.com/Fonserbc/3d31a25e87fdaa541ddf (to look at other functions).

I experimented a bit and here’s the result:

I also suggest this GDC Video: Math for Game Programmers: Fast and Funky 1D Nonlinear Transformations, where you can also have another explanation on easing functions.

Read my game dev content as soon as it's ready, straight to your inbox.
One post every two weeks, you can unsubscribe at any time.